As you read this, we are making our way to the capital, a 9+ hour drive south for a conference. The roads are a combination of dirt and pavement; pot holes, pedestrians, and livestock slow our progress considerably. 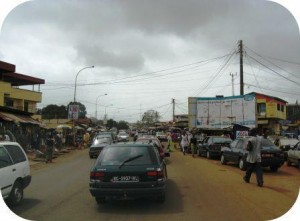 The 2012 OSAC Crime and Safety Reports were recently published. Here is what they have to say about road safety in Guinea:

Guinea’s road networks, both paved and unpaved, are underdeveloped and unsafe. Roads and vehicles are poorly maintained and there are few traffic signs. Livestock and pedestrians create constant road hazards.

Drivers are poorly trained and road safety rules are routinely ignored. Nighttime travel is not advisable because of the large number of animals and people on the roads. Further, most roadways have no street lights, and vehicles frequently operate without headlights.

Defensive driving is crucial, as drivers commonly pull in front of other vehicles or stop abruptly without warning. Equipment on many local vehicles and taxis do not function, such as turn signals, mirrors, headlights, tail lights. Be alert to motorcycles when changing lanes or when you are stopped in traffic. Drivers should pay attention to side streets, and honk the horn when approaching intersections during the day to avoid being hit from the side. When making cross-lane turns, always check rearview mirrors. It is not uncommon for traffic to pass on the side you are turning, even when you are using turn signals.

Public transportation vehicles are both unsafe and overcrowded. The embassy strongly discourages Americans from using public transportation. There are reports of passengers being attacked and robbed. Beware of taxis and mini-buses pulled over to the side of a road. Drivers often re-enter the roadway without looking. 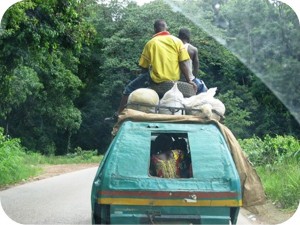 We are particularly aware of the need to be defensive drivers. As the report states, a large number of animals and people are always on the roads, even the main thoroughfare that runs from our town to Conakry. David and I call it the “village mentality.” People and animals don’t look before running out into the road. In a small village with no vehicles present, why would they? 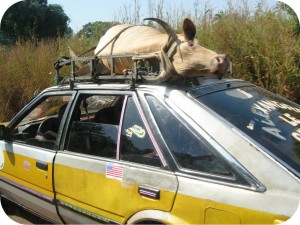 Just last month as we returned home from team meetings, we were driving through a village situated on the main road. The road was nicely paved at that point, so we were moving quickly {about 60 mph} and as we crested a hill, a young boy ran out in front of us without looking. It was the grace of God he didn’t die. Although it all happened so fast, I saw life in slow motion. The boy ran out, and then I looked at his father who threw his hands in the air with clenched fists before bringing them to his mouth. He stood there biting his knuckles while I looked back at the boy and said, “We’re gonna hit him.” David simultaneously slammed on the brakes and laid on the horn.  We missed him by an inch. God spared his life at the last minute by making him take a single step toward the shoulder of the road. It is the grace of God’s that he is still alive.

It seems as though we have countless stories about tractor trailers missing us by mere centimeters and the lives of people and livestock miraculously spared. I believe it is because of faithful supporters who cover us in prayer. Thank you for keeping us safe. 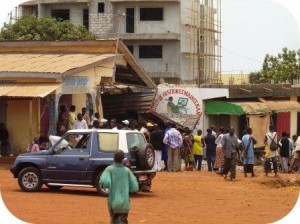 A runaway truck crashed into a home in Conakry.
There were no reported injuries.