We are so excited because just last month, the Pular New Testament finally arrived in country.  For the first time, the Fulbe people will have a finalized translation of the New Testament in their own language.  For the moment, however, these New Testaments are only available in Roman script.  For that reason, our colleague has been working on making some books available in the Arabic script.  Luke is the first book he has completed. 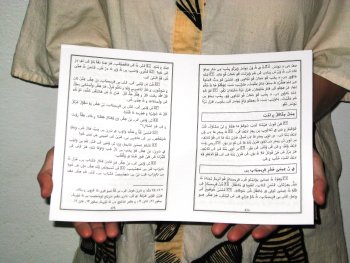 Last week, we helped collate these copies of the Gospel of Luke in Pular written in Arabic script.  The Pular language can be written using two different alphabets, Roman script, like English uses, and Arabic script.  Among the Fulbe people, there are those who can read both scripts, but many read only one or the other.  For that reason, we need copies of the Bible in both scripts.

We were thankful for the opportunity to assist on this project, even in a small way.  Please pray that God will use the power of his Word to break through the layers of opposition to the Gospel that have built up over the years.