In January, we placed an order for $1800 worth of Arabic Script Pular New Testaments.  Other missionaries placed orders as well so that many could be printed at once.  Since then, the New Testaments have been printed in South Korea and are currently being shipped to Guinea.  These New Testaments will be a valuable tool to share the Gospel.  The Pular language can be written with two different writing systems.  We have had the New Testament in Pular written in Roman script since about 2007.  Now, the New Testament will be available in Arabic script as well.  There are many people who could not or would not read the Roman script who will be able to read the Arabic script.  Here are some pictures of God’s Word for the Fulbe people written so that they can read and understand it: 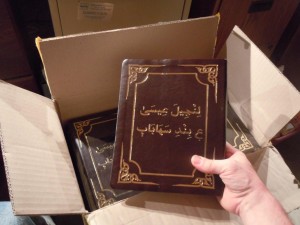 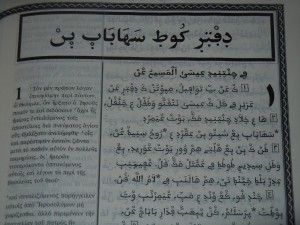