It all started when a mouse got into Georgia’s house. It camped out behind the kitchen counter during the day and came out at night to leave a mess of shredded tin foil and bits of chewed paper and plastic.

Fearing a momma mouse had come indoors to have babies, we quickly set out an African mouse trap: a piece of peanut butter bread suspended over a bucket of water. In theory, when the mouse would walk out across the tightrope to eat the peanut butter bread, the bread would flip over sending the mouse into the death water below. It didn’t work.

Attempt number two involved food on huge pieces of cardboard surrounded by super strength glue. Georgia put one piece of cardboard on the counter and one under the fridge. After a few days, we began doubting the competence of the sticky traps.

While making dinner one night we decided to bring in nature’s best mouser~ our cat, Phoebe. She sniffed all over but never even saw the mouse. We continued making dinner while she walked around. In a flash she bolted to the fridge, and then began flying around the room with such vigor and speed, Georgia thought she must have caught the mouse. On her second lap around the kitchen, I realized she had stepped on the super strength sticky mouse trap that was under the fridge, and being at once shocked and scared, she tried running from it. By the time I caught her and freed the sticky cardboard, her fur was totally soaked. Phoebe was a matted mess of glue from head to toe.

Into the bathtub Phoebe went. First we slithered her with eye makeup remover to dissolve the majority of the glue. Then we gave her two more baths with shampoo to get the eye makeup remover off. She remained tacky (something akin to Velcro) for about a week until she licked the remaining glue from her fur.

Coincidentally, while making dinner, I dropped a piece of beef onto the mouse trap on the counter. The mouse came out about two in the morning for a snack, got caught on the trap and was put in the burn barrel. 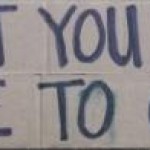